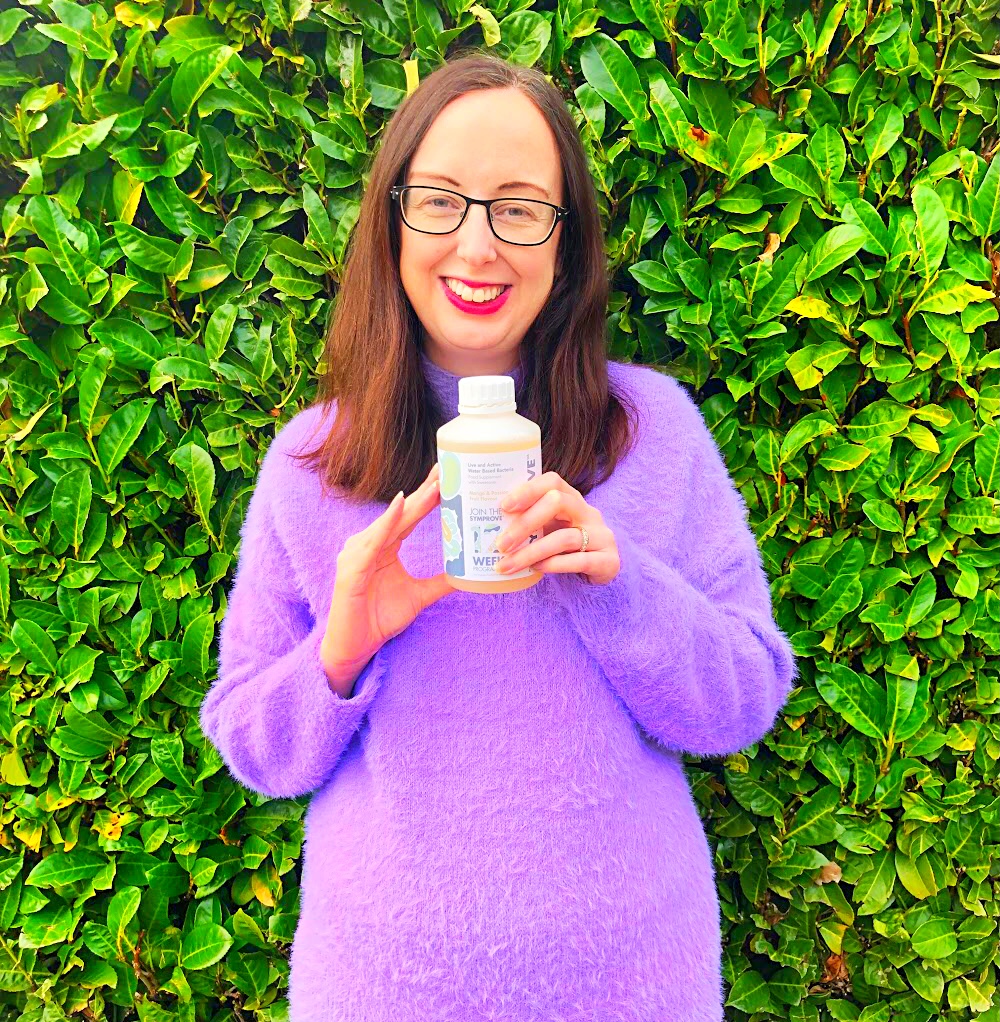 I was sent some Symprove for free to try a few months ago. I wasn’ t specifically asked to but thought I’d blog my experiences of it!

A few months ago, in a gut update, I mentioned I had a new supplement plan. You might have remembered I tested my gut bacteria and the results were not great at all (more on that here but suffice to say, I definitely had plenty of bacteria deficiencies.) So I finally decided to try Symprove.

Other than a few days of terrible pregnancy acid reflux (Where I just couldn’t stomach the supplement) I have stuck to Symprove pretty religiously-which is rare for me in itself! So I decided to blog about my experiences with Symprove as someone has Crohn’s disease and just how I found it in general

What I like about Symprove is that the do have a lot of science behind their product. You might know I’m a journalist and I’ve referred to them and their science a few times in articles-because there are so many products in the health arena which have zero scientific evidence whatsoever!

Symprove have evidence from the University College London that proves the liquid actually does survive our digestive tract and actually colonise in the gut! However, just because something reaches our digestive tract does not automatically make it a good thing for everyone. It’s important to point out that a probiotic supplement is always only part of the solution.

Symprove was found to have a significant reduction of IBS symptoms however there is not so much success with IBD. A study found “significant reductions in the median faecal calprotectin levels in UC patients taking Symprove but no significant differences were seen in those with Crohn’s Disease.” (these studied are all explained in detail on the Symprove website)

This does not surprise me to be honest-as there have been several studies that have suggested probiotics do not seem to influence Crohn’s Disease like we would hope. However, I still feel probiotics are of use to us with Crohn’s. It does make you more likely to have a less varied gut bacteria-and that contributes to everything from IBS to mental health. Many people with IBD have IBS and other symptoms; so I went into this with the mindset it might not help me on a clinical level but could improve my quality of life with IBD.

I have been taking Symprove for a good two months now and I’ve been really pleased. When I tried it years ago, it upset my stomach but this time I have been absolutely fine. I was much stricter with my introduction: I tried 15ml (1/4 of a dose) for the first week, then 30ml (for next few weeks) and then 40ml. The full dose is 60ml but I found my stomach would rumble if I got up to 60ml.

So I decided to stick at 40ml. Being pregnant, it’s important to me that I didn’t make any drastic changes and upset my stomach. I know the idea is to do 12 weeks at 60ml and then a maintenance dose of your choice. However, I wanted to work with what my belly was saying and as I wasn’t looking for any drastic results I am happy I did! As I am immune suppressants too, I didn’t want to overdo things so I am happy with this dose for now and going to stick to it!

I noticed within the first few weeks that I could eat a much more varied diet than previously. This could well be pregnancy but I believe Symprove definitely helped me with digesting things like strawberries (Which I know love and couldn’t tolerate before).

A few weeks ago, I got a cold and was quite worried about it lingering for ages. However, it went within two days and I really do believe the Symprove played a part in this too! I felt it really helped me fight off the bugs-again, considering I am on immune medication too!

Overall, my symptoms have been great whilst on Symprove-but I am not sure if that is the Humira or my pregnancy playing a part in things too. I am happy as I had read that probiotics when pregnant can help things like reducing the chance of your baby developing eczema-so I’ve felt positive taking a small dose of something each day that helps my belly.

A note about Mango and Passionfruit Flavour

Last week, my Symprove order arrived and it was Mango and Passionfruit flavour. This contains Sucralose and whilst I thought I might be ok (I don’t do great with sweetners) I struggled as soon as I started taking it. This actually gave me a little reassurance that I WAS seeing a benefit from the original but the Mango flavour is not for me.

Symprove for Crohn’s Disease: The Verdict

I don’t think any probiotic can significantly alter the course of your Crohn’s Disease but I DO feel it’s really important that those of with IBD work on our gut bacteria. Ideally, I’d recommend testing your gut bacteria-using either the Atlas gut bacteria kit or the Thryve gut bacteria testing kit. That way, you’ll have an idea of what you’re deficient in before starting. I think I will retest my bacteria levels once arrives (I’m not sure if affects it?) to see if it has made a difference.

A liquid supplement has a lot of benefits for those of with IBD-and it’s proven it will reach your digestive tract. So if you’re going to take any probiotic for your IBD, I’d recommend this one. However, I’d be willing to start in small doses like me and perhaps accept you might not make it up to the complete dose as quickly. I think Symprove can make a real difference to helping you eat a wider variety of foods, support your immunity and help with symptoms but it is obviously not a solution for IBD. You can find out more about Symprove, their clinical studies and their product here.

Welcome to my blog! Here you'll find musings about pets, journal entries about my travels, and a shameless plug or two (or three). I'm always looking for cool people to work with. Contact me!

Today I’m back with a new recipe. Over the last few days, I’ve been trying to focus on liquid nutrition-in other words: foods that are blended or juiced to give my gut a break.  ...

As you know, I blog a lot about juicing but not so much about smoothies! Some smoothies can be difficult to digest if they have a lot of fibre but I’m always being...

Now in the Shop

After a time she heard a little pattering of feet in the distance, and she hastily dried her eyes to see what was coming. It was the White Rabbit returning, splendidly dressed, with a pair of white kid gloves.

Be happy. It drives people crazy.