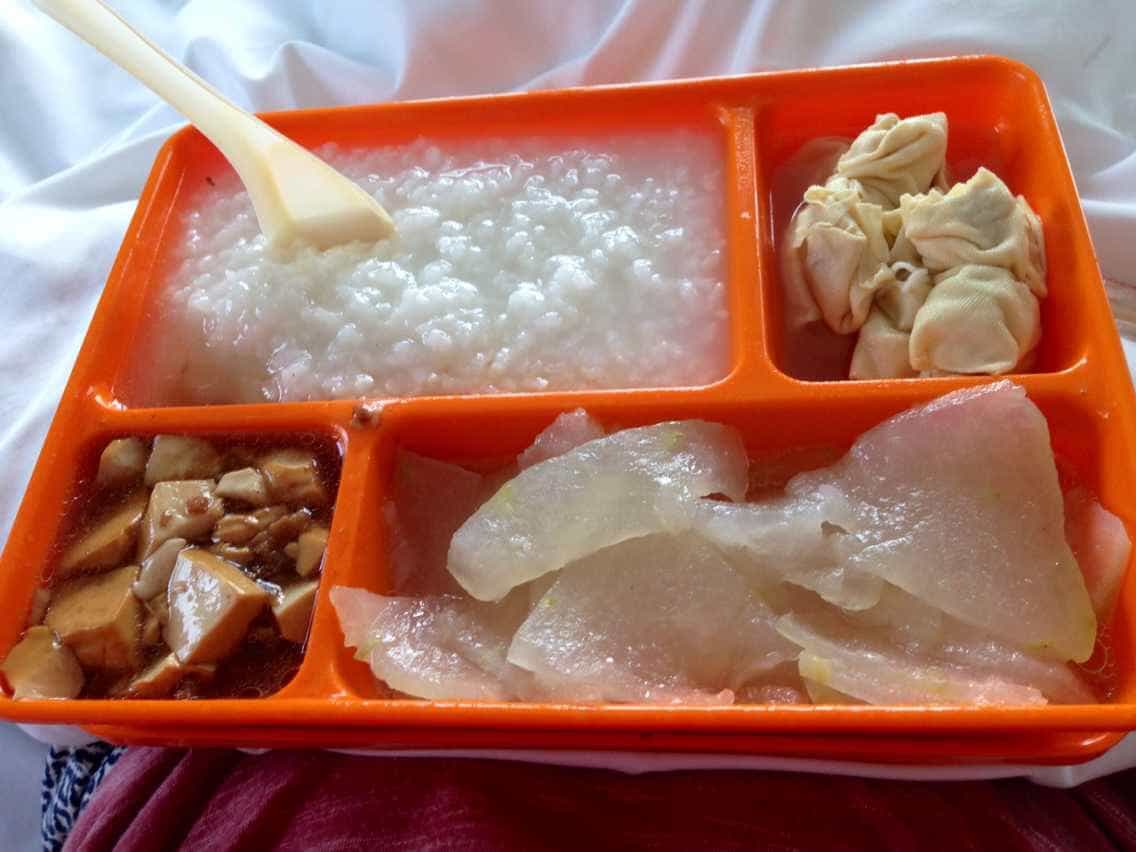 Today I wanted to take a moment to actually blog about my diagnosis journey. This week is ‘Love Your Gut’ week so I thought what better time to write a post to share my journey, and encourage all my readers to do one thing: listen to their guts! I did an Insta-stories recently about how frustrated I was that people were continuing to self-diagnose or being fobbed off. So while the recipes and tips you will see this week are undoubtedly important, for me, the only way to truly love your gut is to not dismiss it- and make sure you receive a proper diagnosis. 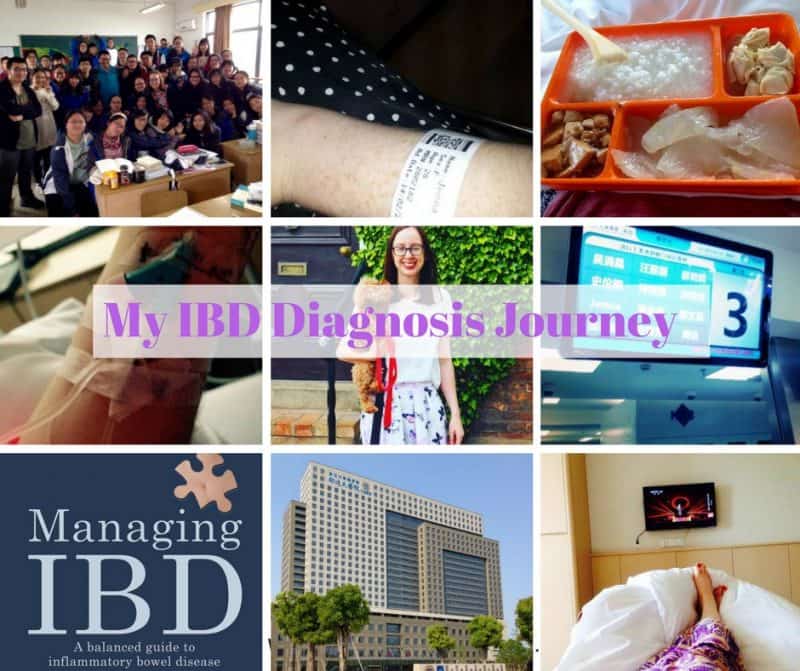 Let’s go back to the beginning…

It started when I was 16. I can remember being really stressed about my GCSEs and, as a result, it felt like I was always needing the loo. I also started a part-time job at Next (which I absolutely hated) so it seemed to make common sense that it could be ‘IBS’, which the doctor quickly put it down to- despite not doing a single test.

I don’t remember much about my symptoms between the ages of 16-18. All I really remember is struggling to put on weight and being asked if I was anorexic. The next straw came when at the age of 18, my periods just disappeared.  I wasn’t too worried at the time but I was sent to the hospital for scans of my ovaries, which all came back clear. At this point, my iron was tested and my GP said it was the worst case of anemia he had ever seen.

Celebrating my 18th birthday- I was skinny but it was only when I went to uni that things got worse.

Yet nobody seemed to connect the absent periods, weight loss and anaemia together. So still I went on. I remember often feeling tired and dizzy- but I thought that was just me. When you are thin, doctors are quick to blame things on your weight and comments like ‘if you eat more, your periods will come back’ were common. By the time of 19, I was really quite depressed. I just never felt well and suddenly felt really anxious at being away from home. My family couldn’t understand why the girl desperate to leave home to go to Uni, kept crying down the phone and- when I did make it home- spend most of it sleeping.

By the time 20 came around the corner, I felt as if I never experienced normal toilet trips. Unlike most classic Crohn’s patients, I never had pain, or went to the loo that often (no more than a few times a day) and there was very rarely blood (once or twice from piles but that was it). But I was fed up and eventually was put forward to a consultant, who ordered a colonoscopy.

When the day arrived, it turned out that I had been booked in for a Sigmoidoscopy- this test is much less invasive but only looks at the bottom of your digestive tract so can miss out IBD and other nasty things. This came back clear (unsurprisingly). I did a blood test which showed I had ‘a bit of inflammation’ but they said it could be because of having a cold or being intolerant to some food. I decided to give up dairy as I felt that was linked to my symptoms and a few weeks later, the blood test came back normal.

I am actually getting quite upset as I type this, as it just feels worlds apart from my life now.  But, I really thought my journey was over-I can’t believe I simply believed the blood test. Sadly at this point, I felt like most people were getting frustrated with me for exaggerating and I became a bit of a recluse.

A literal pain in the arse

After I got married, I started to develop a severe pain in my bottom. Nobody knew exactly what it was- a boil? a spot? a pile? After a week of agony, I was diagnosed with perianal abscess. Again looking back, this is one of the most key signs of IBD, but instead I was frequently tested for diabetes! A few months after my recovery, another one came again! I started to believe that it could be due to cleanliness and started to obsessively bathe- at least 4 times a day.

When I was recovering my operation, I was completely depressed and decided I needed a change of scenery. So, I applied for a job in China and I got it! Now this might seem an extreme reaction to a surgery, but I was looking for change anyway and thought I had nothing to lose. 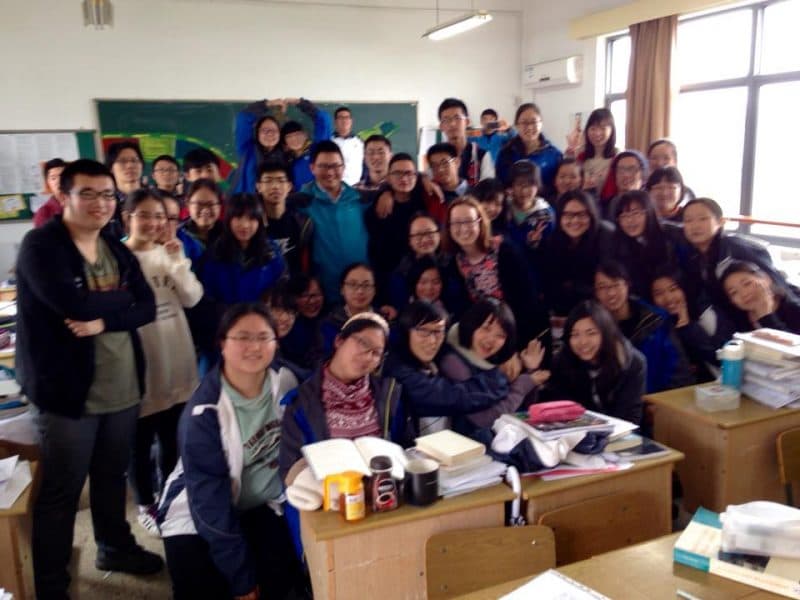 Me and my lovely, lovely students.

The first year in China was one of the best of my life. The doctor had given me a stash of antibiotics in case my abscess came back. So at the slightest twinge, I took a few weeks course and for the first time in years, my tummy troubles disappeared! Hooray! Unfortunately, this wasn’t to last.

About a year into my stay, I started to get weird symptoms. I had an ‘acidic type’ pain in my stomach and kept feeling sick. I went to see a local doctor and paid 75 pence for the privilege! Through his broken English, he explained that my symptoms did not sound like IBS and I needed a colonoscopy. I dismissed him at first but a week later, during my first parents’ evening of the term, I promptly vomited in front of a parent and their child. After I’d assured them that this wasn’t a British custom, I was warned by my boss to get to the hospital sharpish.

Thanks to my health insurance, I was booked into a swanky Shanghai hospital within days. The doctor there (who was american) couldn’t believe I had not been given a colonoscopy and quickly ordered one. Everybody-including me- thought he was being a bit dramatic, but I cancelled my booze cruise that I’d booked for the following week at his insistence and was booked in for an emergency colonscopy and endoscopy. 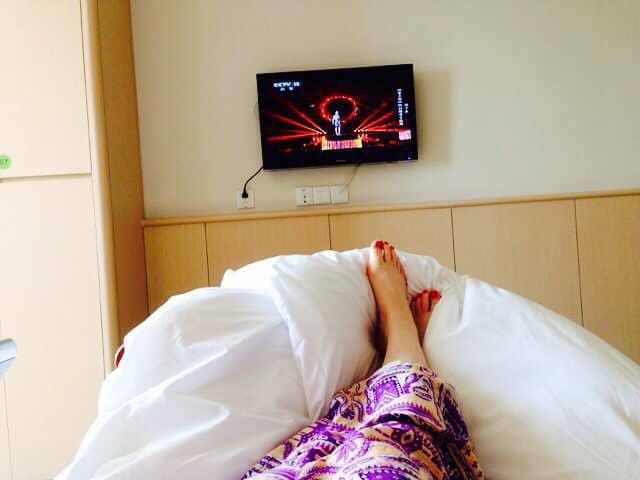 When I woke up, the doctor confirmed I had Crohn’s I was in shock. In fact, as I  was in a private hospital, I must have pressed the buzzer 15 times and asked the doctor to confirm the diagnosis (I was extremely dosed up on anesthetic). All I can remember after that is demanding my husband take me to The Ritz (the shop next to the hotel was one of the few in the city to sell British magazines and Dairy Milk- and I was in desperate need of both).

After diagnosis, I stayed in China for another year and a half. I was transferred to a local hospital and am completely indebted to how they took care of me. Crohn’s is an extremely rare condition in China (although rapidly growing) but they managing my first year of treatment on Infliximab and the care I received was second to none. 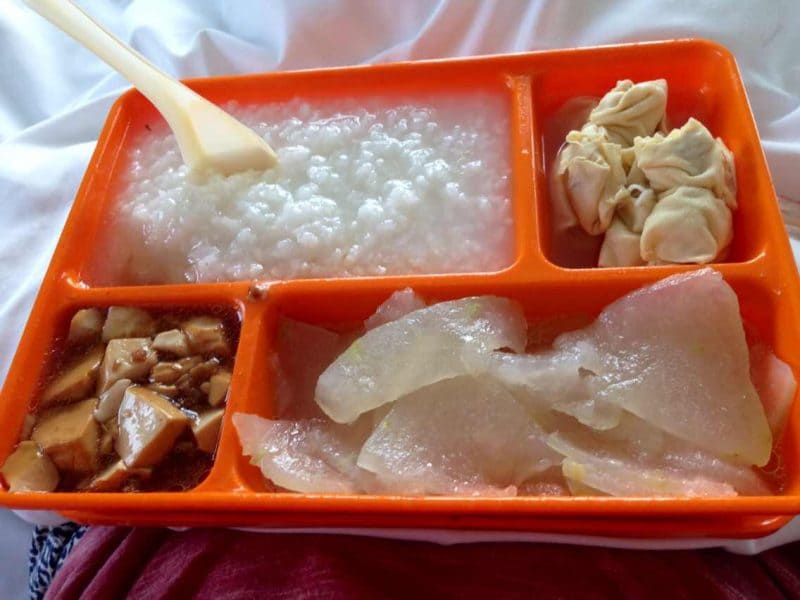 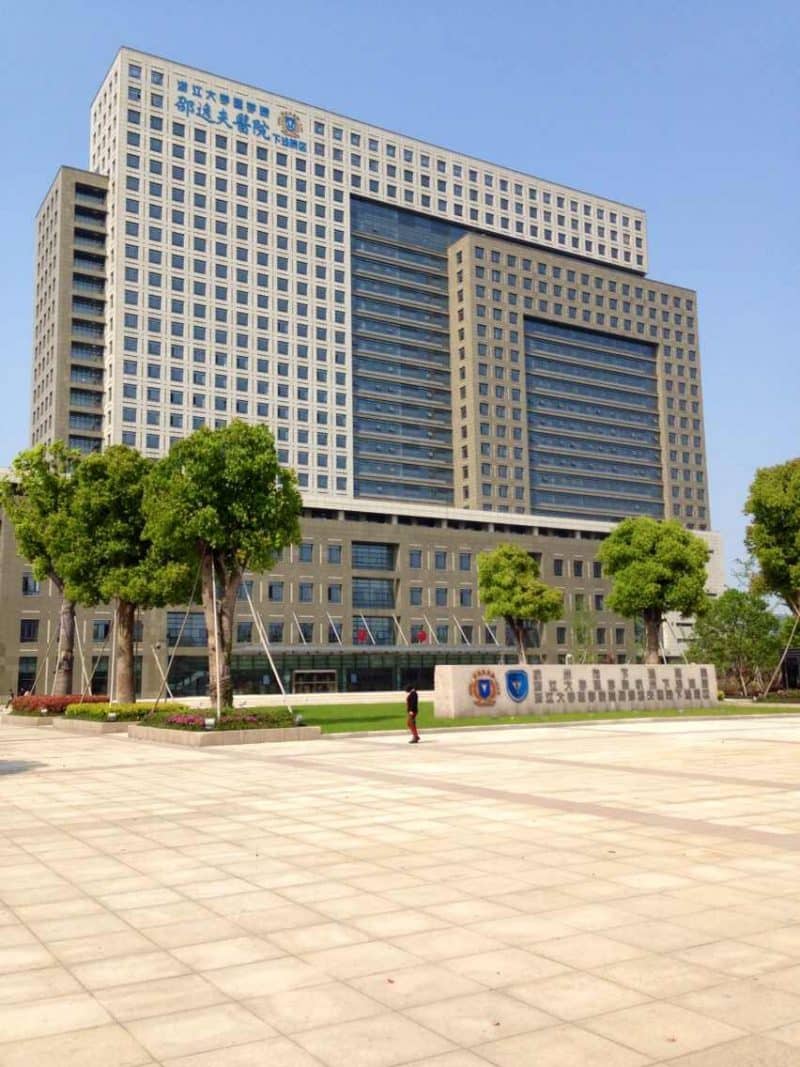 Every 8 weeks, I travelled to Hangzhou for treatment. It was a 2 hour train ride there and back!! The hospital was amazing though.

And that brings me to the present! After another year and a half, I decided to come home. The NHS who treated me since have also been fantastic. And, of course, I finally managed to achieve my dream my publishing my own book on life with IBD (more about that here!) 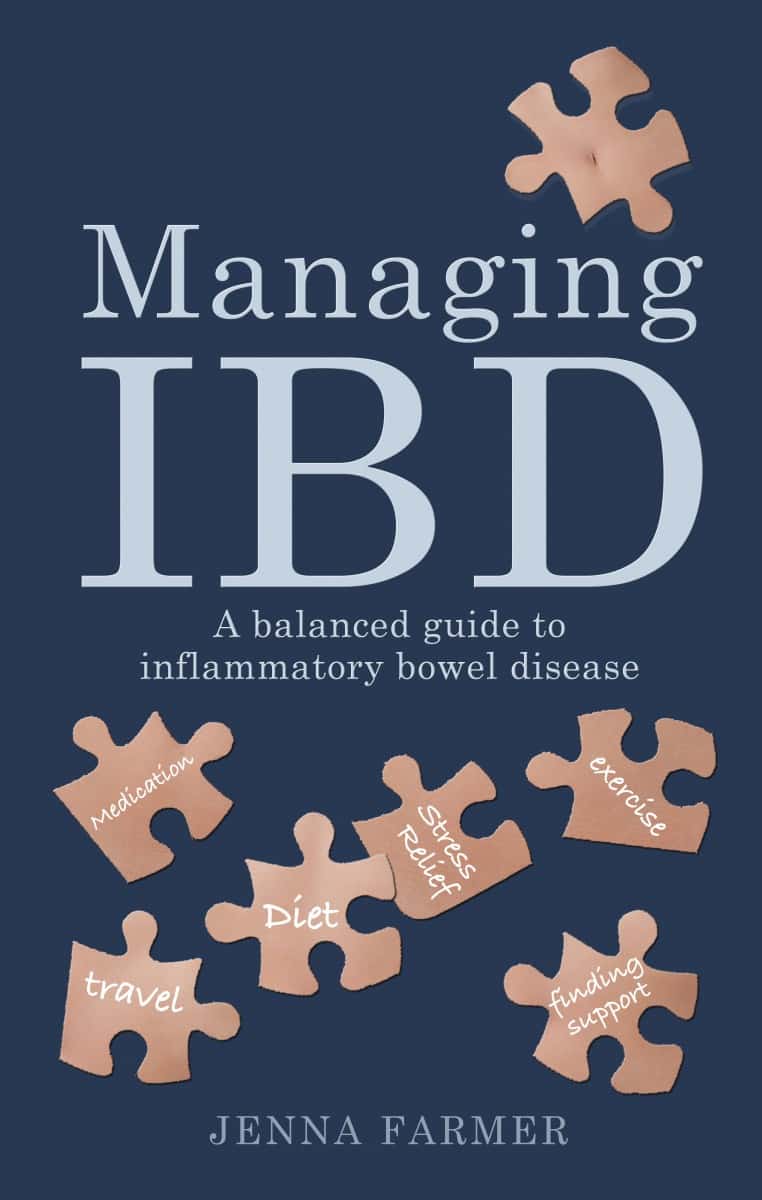 I used to feel so much regret that I was misdiagnosed for so long. Now I accept what happened but I’ll never stop raising awareness for proper testing. Although I am not suggesting every person in the country immediately books in for a colonoscopy, if you continue to feel unwell, please don’t ignore your symptoms. There is no such thing as ‘a Crohn’s blood test.’ A doctor can test for inflammatory markers in your blood, but as I mentioned earlier, mine were normal at points in my life. New innovations mean doctors can test your stool. This is not a standard test but a special faecal calprotectin test which looks at inflammation in the stool. However, the only real way to know exactly what is going on with your gut, is to make sure your doctors take a good luck at it…

Want more info?
Email me: jfarmer@abalancedbelly.co.uk.
Learn more about my online Nutrition consultations. here.
Facebook group: Join here
Subscribe for free to my a balanced belly newsletter to keep up with all my blog post and a free food diary template here.
Info on my book ‘Managing IBD’ stockists here

Welcome to my blog! Here you'll find musings about pets, journal entries about my travels, and a shameless plug or two (or three). I'm always looking for cool people to work with. Contact me!

Today I’m back with a new recipe. Over the last few days, I’ve been trying to focus on liquid nutrition-in other words: foods that are blended or juiced to give my gut a break.  ...

As you know, I blog a lot about juicing but not so much about smoothies! Some smoothies can be difficult to digest if they have a lot of fibre but I’m always being...

Anyone else obsessed with their slow cooker lately? Finding gluten and dairy-free meal ideals can be tricky but a slow cooker makes it a lot easier! Just pop all of the ingredients in of a...

Now in the Shop

After a time she heard a little pattering of feet in the distance, and she hastily dried her eyes to see what was coming. It was the White Rabbit returning, splendidly dressed, with a pair of white kid gloves.

Be happy. It drives people crazy.